Topic: The jetty of the future: Reducing the environmental impact of a jetty platform structure by designing for reusability

Description: The significant adverse contribution of the construction industry on greenhouse gas emissions and nat-
ural resource depletion has to be reduced. Regarding jetty platform structures, this challenge can be
faced by designing for reusability, a promising concept for environmental impact reduction. However,
this principle is not yet being widely implemented, leading to the absence of reusable jetty structures.
This research aims to identify the feasibility of designing a jetty platform for reusability and the contri-
bution of reusability to the environmental impact reduction of jetty platform structures.
A jetty, that is being constructed during the execution of this research in the port of Rotterdam, was
taken as a reference structure. By creating a design according to the Design for Disassembly require-
ments, while fulfilling similar functions as the reference jetty, a concept of a reusable jetty platform
design was created. This was modelled in the SCIA Engineer software so that the global behaviour
of the structure and the robustness were investigated when using simple connection solutions. As a
result, demountable connections could be designed, which were based on existing configurations from
other applications. The practical aspects of assembly and maintenance were assessed through an
interview with a maintenance expert from Port of Rotterdam. Furthermore, a brief study was done to
investigate the possibilities of modularity and applicability to other jetties in the port. To investigate the
environmental impact reduction, a life cycle assessment was performed, in which the impact of the
reference structure was compared to that of three reusable structure variants: the reusable design, the
modular reusable design and the modular reusable design using concrete with a lower impact.
Due to the use of simple connections in the reusable jetty design, steps in the displacements are
found between elements. These causes limitations in the flexibility of placement of the superstructure
and may cause deformations in pipelines when those are placed on the platform. Also, the reusable jetty
has to be constructed with a larger crane than is conventionally used, which may cause hindrance to the
surroundings. However, time of construction will be reduced. The results of the life cycle assessment
show that the initial impact of all the assessed reusable design variants were larger than that of the
reference jetty. However, already for reusing once in the structure’s lifetime, this investment can be
compensated when compared to replacing the reference jetty with a new structure. An assessment
was also made for the modular design variants, which can be applied to all 100 jetties in the port. When
assuming a structure is reused or needs replacement once during its lifetime, a tipping point was found
when 24 to 44% of the structures are being replaced or reused, at which the investment is compensated.
When not constructing the platform entirely directly, but adapting it when future requirements become
more certain, potentially no investment is needed to be made.
From the results, it can be concluded that reusability contributes to lowering the environmental
impact of the jetty platform when it needs replacement or reuse at least once during its lifetime or when
the given percentage of the structures are being reused once during this time. Thus, reusability can be
applied to reduce the environmental impact of jetty platform structures. 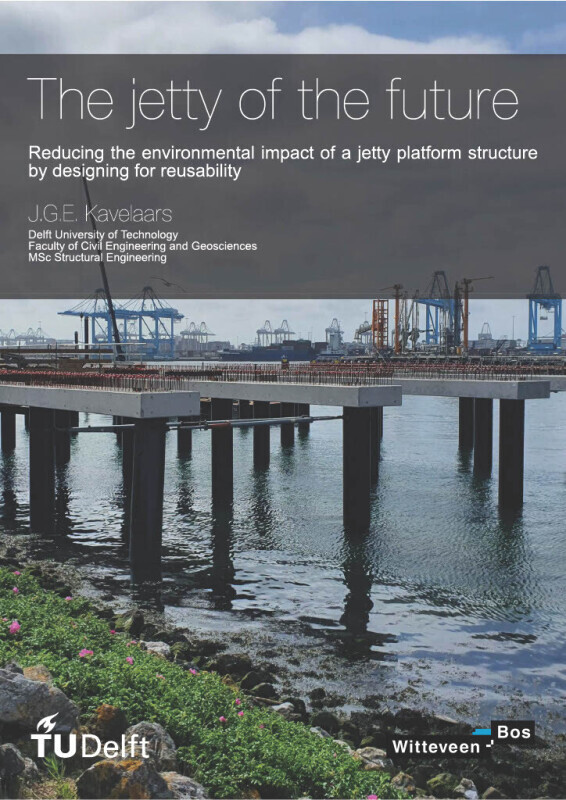